St. Jerome and The Lion


Jerome, in addition to being a scholar and translator of Greek and Hebrew, was a familiar figure in the Middle Ages. The faithful were made aware of many episodes in saints' lives by their depiction in various works of art. In Jerome's case, the most popular scenes were of him
However, it is Saint Jerome in his study that is familiar to many. He is seated at a desk with Hebrew and Greek texts, translating them into Latin. A red cardinal's hat is usually shown, either worn on his head or hanging on the wall. This, however, is an anachronism since the office of cardinal with its red robes and hat was not established until the end of the tenth century and Jerome lived in the fourth and fifth centuries.

Guarding his study or resting near his feet is a tame or pet lion. Sometimes the lion is asleep but his eyes remain open. At least in medieval art, lions could sleep with their eyes open as in the Psalm:
". . . . he that keepeth Israel shall neither slumber nor sleep" (King James, Psalms, 121, 4). Asleep or awake, I am sure that the lion was most effective in ensuring quiet in the study.
Thus, the iconography for Saint Jerome includes a cardinal's hat and a lion.
Saint Jerome was posthumously elevated to the rank of ordinal to show his stature in the hierarchy of the church. The lion comes from a story.

One day a lion came limping to Saint Jerome holding out his paw. On examination, Saint Jerome discovered that the lion's paw had a thorn in it. Jerome removed the thorn, cleaned the wound, and bound up the paw. For this, the lion was very grateful to Jerome. As a result, he took up residence at the monastery and even did chores.
Allegorically, removing a thorn - which represents sin as in the crown of thorns - is baptism or banishing the beast in man.

The old trick of removing a thorn was a well known technique of lion-taming in the ancient world. Aesop wrote about it and Androcles was spared in the arena when a lion recognized him as the one who had removed a thorn from his paw. There was also a Saint Gerasmus who tamed a lion. Some authorities speculate that the story became associated with Jerome due to the similarity of names.

Meanwhile, back at the monastery, the lion was assigned the task of guarding a donkey that carried firewood to the monastery from the forest where it was cut. One day the lion went to sleep and must have closed both eyes. Merchants in a passing caravan saw the donkey unattended and stole him to serve as their beast of burden.

The monks thought the lion had eaten the donkey and, as a result, told him that he had to assume the donkey's tasks. So the lion began to haul the firewood to the monastery. This seems to me quite bold on the monks' part since a lion that can devour a donkey should not scruple at eating a monk or two. One day while carrying firewood tied on his back, the lion saw the same caravan returning with the monastery's donkey still in tow. With roars and threatening gestures the lion herded the caravan to the monastery. His roaring alerted the monks who came out and recovered their donkey and I hope, apologized to the lion. One would assume the rejoicing over finding the lost animal was great, especially on the part of the lion. 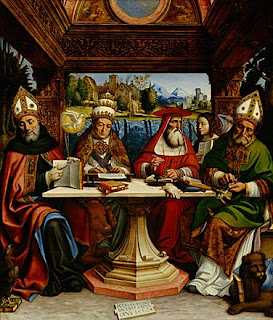 “Look, I am standing at the door, knocking. If one of you hears me calling and opens the door, I will come in to share a meal at that person’s side.” (Rev 3:20)

For Those With a Purposeful Calling to Work from Home

BLOGS - Homilies & Reflections on the Readings

LINKS - Homilies & Reflections on the Readings

The Catholic Church is the only thing which saves a man from the degrading slavery of being a child of his age. G. K. Chesterton

The Holy Father Needs Our Prayers

PRAYER OF ST. GERTRUDE THE GREAT

ETERNAL FATHER, I OFFER THEE THE MOST PRECIOUS BLOOD OF THY DIVINE SON, JESUS, IN UNION WITH THE MASSES SAID THROUGHOUT THE WORLD TODAY, FOR ALL THE HOLY SOULS IN PURGATORY, FOR SINNERS EVERYWHERE, FOR SINNERS IN THE UNIVERSAL CHURCH, THOSE IN MY OWN HOME AND WITHIN MY FAMILY.
AMEN

Have Him Speak @ Your Parish!!

"For the rest of my life I will be about the conversion of my heart, my mind, my opinions, my dreams, my plans, my attitude, my motives.... etc. Everything must slowly but surely be conformed to the will of God."

Otherwise everything is slowly but surely being conformed to my will or someone else's or some cultural norm.

There is no neutral ground here. We are changing whether we want to or not -we are getting stronger or weaker in faith. We are growing closer to or farther apart from our spouse. We are becoming a closer family or becoming more and more estranged from one another."

There is the Church

This is a baby not a choice.

Our society has become deranged... We are killing our children; if we are not deranged, we are something much, much worse. -- paraphrased from an article in Catholic World Report

...whose protection is so great, so strong, so prompt before the Throne of God, I place in thee all my interests and desires. O, St. Joseph, do assist me by thy powerful intercession and obtain for me from thy Divine Son all spiritual blessings; so that having engaged here below thy Heavenly power I may offer my thanksgiving and homage to the most loving of Fathers. O, St. Joseph, I never weary contemplating thee and Jesus asleep in thy arms. I dare not approach while He reposes near thy heart. Press Him in my name, and kiss His fine Head for me, and ask Him to return the kiss when I draw my dying breath. St. Joseph, patron of departing souls, pray for us. Amen.

“Jesus Christ, Lord of all things! You see my heart, you know my desires. Possess all that I am—you alone. I am your sheep; make me worthy to overcome the devil.”

in all the world my nest is best

Tolerance is only a virtue when it is practiced in harmony with the divine precepts.

Are We There Yet?

Everything will be alright in the end.

If it's not alright, it's not the end.

Rev 3:20
“Look, I am standing at the door, knocking. If one of you hears me calling and opens the door, I will come in to share a meal at that person’s side.”

Matthew 23:9 "Call no man your father on earth, for you have one Father, who is in heaven"
That verse means you should not honor a man like you honor God. Jesus didn't mean you couldn't call your dad or a priest "father."
In 1 Corinthians 4:15 saint Paul wrote, "I became your father in Christ Jesus through the gospel."